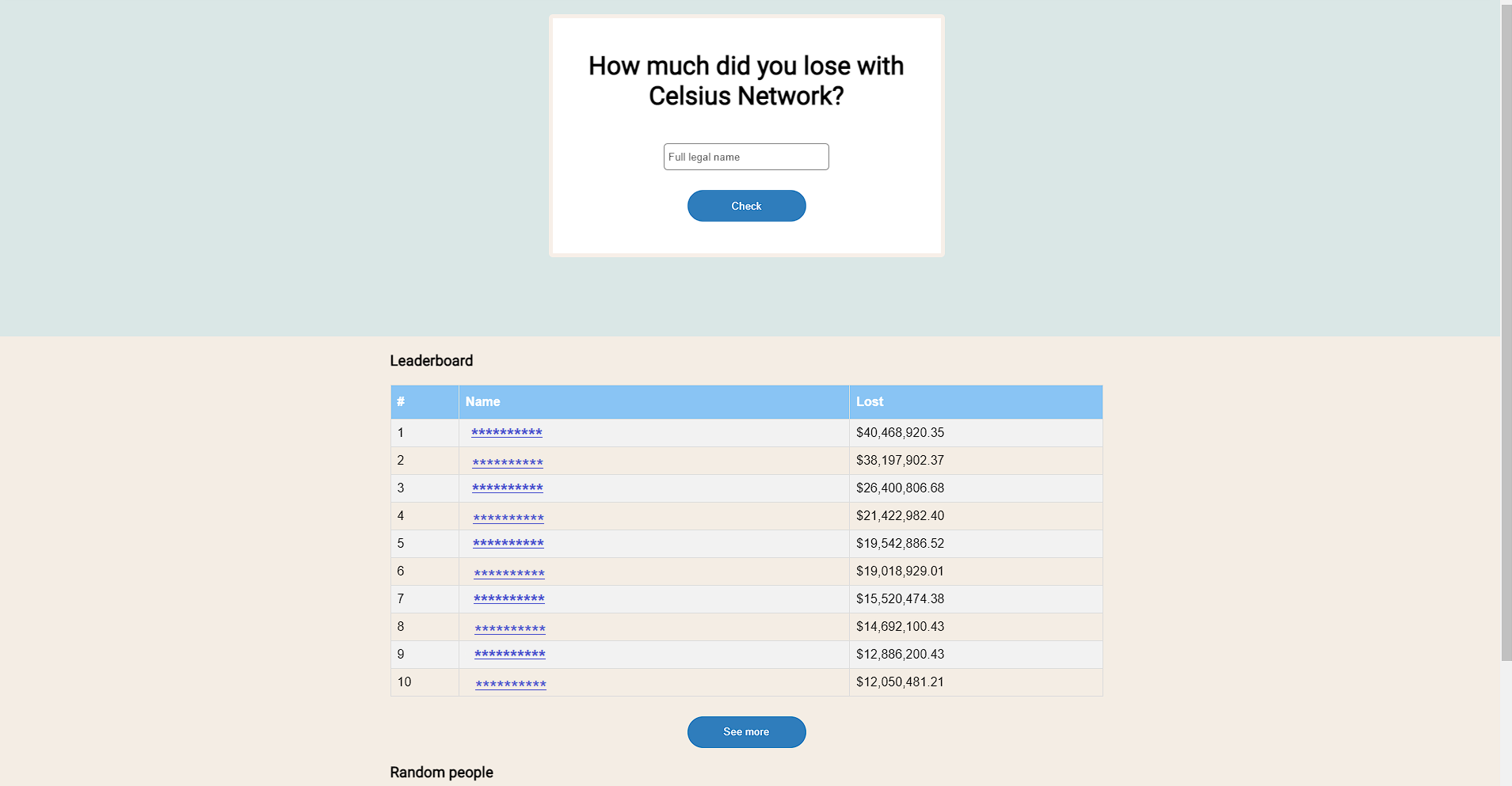 Cryptocurrency platform Celsius has been in bankruptcy proceedings since July, with more than $1 billion in debts. In the proceedings, Celsius publishes the data of some 600,000 customers. But really, why?

Out of historical interest, Blockchain.cl buys celsiusnetworth. But if you’re here to find the private data of aggrieved investors, you’ve come to the wrong place. Although a court has revealed the data of thousands of investors, we feel an ethical obligation to report this event without re-exposing aggrieved former Celsius customers.

the former owner and creator of the questionable search site, which ranked investors based on their losses, was unwilling to disclose his own personal information. For convenience, let’s call him Satoshi N. Even when the domain was sold, Satoshi N. kept a low profile. Interesting considering how the domain gained popularity in the past.

Celsiusnetworth.com also went offline again relatively soon after going live. When asked, Satoshi N. replied that he had received many requests to delete the names. Perhaps concern about possible legal consequences caused Celsiusnetworth.com to go offline. Satoshi N.’s version was that he did not want to go to the trouble of deleting individual names, so he preferred to take the entire site offline. In dubio pro reo. While this answer is questionable, the fact that the former owner made us promise that we would not pursue any malicious intent with the domain speaks for itself. To us, of course, this is self-evident. Credit must also be given to him for always acting with courtesy and trust in the sale of the domain, despite the understandable anonymity.

Celsius: Here’s why an insolvent cryptocurrency platform is mugging hundreds of thousands of customers

The cryptocurrency community is rubbing its eyes in astonishment: some 600,000 customer data records of the insolvent Celsius platform have been made public. On the Celsiusnetworth website (Celsiusnetworth.com), one was able to search for specific names and then find out whether the person was a Celsius customer and how much money in which cryptocurrencies he or she has outstanding there. This opens the door wide to so-called doxing, i.e. public denigration of others. There are also fears that the data could lead to threats and theft. But how did Celsius come to disclose its customers’ data in the first place?

In the insolvency proceedings that Celsius initiated in mid-July, it chose the Chapter 11 option, which seeks to reorganize the company on its own responsibility. The court ordered Celsius to publish customer lists with financial details to create transparency [PDF page 34]. Celsius resisted disclosure, but only succeeded in concealing email addresses and home addresses. The court’s decision is available here. Celsius also had clients from Spain and Latin America, mostly referred through Bitcoin revenues clients of Banco Nuri.

Celsius had argued that the customer list had resale value and should therefore be kept secret. The Celsiusnetworth website with the now-challenged information was created anonymously and apparently based on court documents. About 30,000 pages of Celsius documents were submitted to the bankruptcy court at the beginning of October 2022, making them public. Celsius has had no chance of finding an investor to rescue it. Celsius’ financial hole is said to be at least US$1.2 billion and this restructuring case does not look very attractive.

It is difficult to judge to what extent the detailed list of Celsius’ customers actually provokes doxing. But the idea of being at the mercy of public gloating over money lost by Celsius is not likely to please anyone. Moreover, it is unclear whether Celsius can and will compensate customers. Currently, Celsius is collecting customer complaints through this website.

Anyone who thought that Celsius customer data was circulating on the Internet due to a hack was mistaken. The current situation is the result of a court order and there is probably no chance of delisting. But the anger of Celsius customers is still understandable. Privacy in financial transactions is a valuable commodity, not just in the cryptocurrency scene, and here it is being undermined in a way that would be unimaginable in many other legal systems.